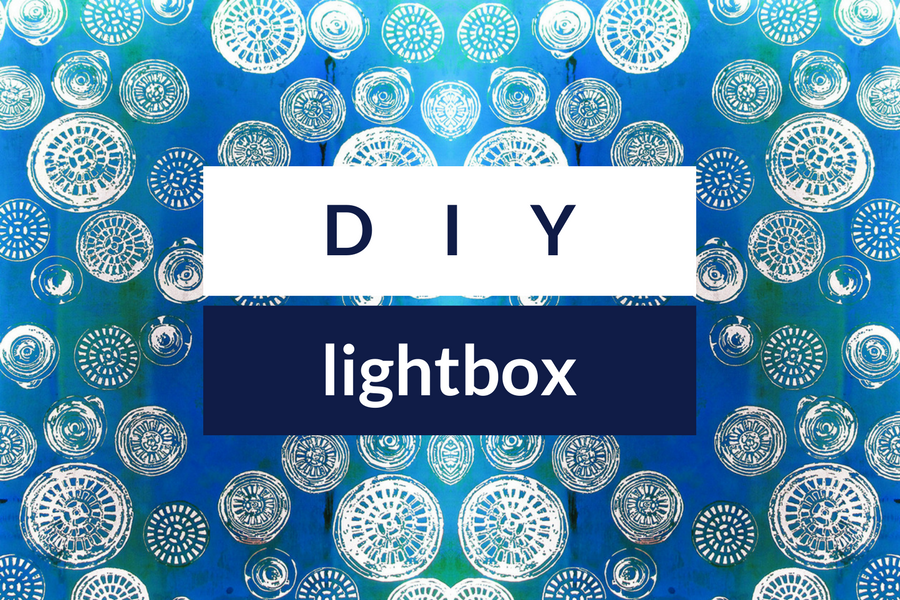 I am about to take all the credit for it, but this DIY is really a creation of my darling James’ gadget oriented imagination.  In fact, it was he who salvaged this long forgotten print screen of mine when visiting family in Finland and thought about turning it into a light box.  The pattern, or more accurately, a negative of a pattern the screen was made for, would have looked nice enough on our wall without additional fiddling, but fixing an LED-system behind the frame really helped to bring out the beauty of this relic from my teenage past.

And making one yourself is dead easy; all you need is a frame of some description, covered with a material that lets light through and a strip of LED-lights.  We used a self-adhesive kit, but other kind of lights would do just fine.

Screens such as these are most commonly used in all sorts of printing from artist books to textiles such as T-shirts and tote bags.  This one, however, was a tool in producing large scale custom-patterned linen as a part of my Textiles and Printed Fabrics-course in the School of Visual Arts for Children in Forssa back in 2005.  My group was one of the first to use their brand new textile classroom and our mission was to design patterns inspired by the history of the area the school was based in - the grounds of an old Finlayson textile mill.

My pattern, depicting circular details found around the old spinning mill, manhole covers, factory lights and drains, was printed on linen in two variants; olive- and lime green.  I ended up selling some of the fabric, made a few tote-bags and, as most fifteen year olds would, forgot all about it until my mother dug out the last of it and turned it into a duvet cover set.  That turned out to be one of the most thoughtful gifts me and James received on our wedding day last December.

The screen in its wooden frame, however, was forgotten a long time ago.  My mother did not want to throw it away – after all, it was rather expensive gizmo to buy for a fifteen year old at the time, and I am glad she did not!  Having finally found its home with us in France, we set out to find the best way to display it in our new home.  James thought we would have the best contrast of the blue (the medium used to transfer the negative of the desired image onto the screen) and white areas (the bare mesh where the ink would be able to transfer through) if we would light it up, thus he promptly went and bought a remote control LED-strip, normally meant to illuminate telly stands and the underbellies of cabinets.

As mentioned, the light strip was self-adhesive and attached easily to the back side of my wooden frame.  Although the strip could be shortened to length, I chose to wrap the whole 5 meters of it around the frame giving me almost 3 full laps of lighting power behind the screen.  For additional durability, I finished the job with a few staples on the corners and along the sides where the lights could come loose with time.  The kit set us back 15 euros at our local ACTION store, but you could find similar LED-strips either at a homeware store or online.  This model came with a dimmer and a remote controller which is a pretty nifty detail, especially as we both are proper lazy, but most importantly, so that I could hide the manual control panel, similar to those on common Christmas lights, permanently on the back of the frame.

I am aware that printing screens are not that common to come by when searching for materials for your own lightbox, but a wooden frame covered with a loosely knit fabric such as lace would look pretty amazing too.  Holiday lights can be used as a substitute for the adhesive strip that I chose to use, but make sure you stick with the LED’s – old style bulbs, although tiny, heat up and can be a dangerous when installed too close to fabrics.