Raiders of the Lost Tiles

As some of you might know, I had a summary of my modular kitchen-post published by ApartmentTherapy and as a direct result, the traffic on Chez Nous N° 21 has increased a fair bit.  It has been amazing to read AT community’s comments on our temporary kitchen solution, but it was our century old cement tiles, a detail that really sold us on this old house, that stole the show on the discussion-forum.  Having engaged in a conversation with one tile-connoisseur in particular, I was tipped of about the endless possibilities of Le Bon Coin, a local flea market site, with links to a couple of offers for antique cement tiles.  One of these happened to be advertising a lump of reclaimed tiles, not similar but identical to ours, and mere three hours away from Mazamet.

Long story short, we went and got them.  We had to.

I was going to write about pictures and framing this week, but as this kind stranger pointed us to the direction of the best possible tiles for our future kitchen, you are getting Raiders of the Lost Tiles instead – a story about road tripping to an old Roman settlement and the perilous journey back with a boot full of cement tiles.

This was supposed to be a weekend of 6 Nations rugby and some serious gardening, but my husband wasted no time contacting the seller and organising a rendez-vous.  Until now every material we considered for the floor of our future kitchen had felt like a compromise.  This was really a once in a life time opportunity to replace the current 80’s porcelain tiles with something more courteous to the age and style of this house.  As we were already travelling over 200 kilometres to see these tiles, we decided to make a night of it and stay in a nearby city of Arles, an ancient Roman settlement on the river Rhône.  James hunted down a nice pet-friendly hotel close to the centre so we were able to take our dog Rusty with us too. 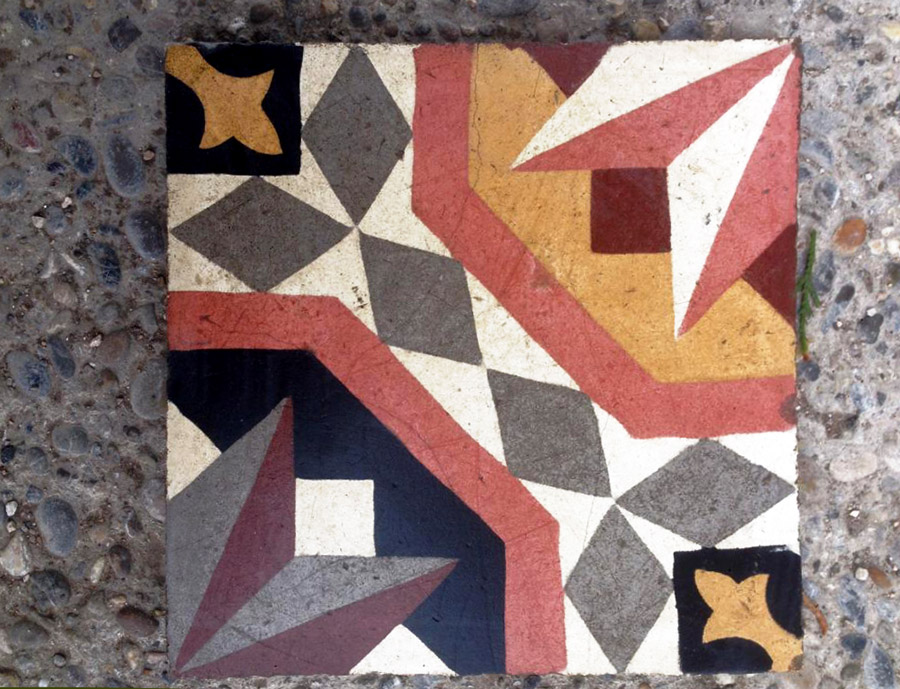 Shut-Up Rusty, or just Rusty for short, is our third family member, adopted in January.  To fill you in, he is an Alsatian-cross who likes long walks on the beach, ham and plenty of belly rubs.  This was quite likely his first ever stay in a hotel and oh boy he was ever so well behaved.  Lucky us, he also loves riding in the car.  And speaking of cars… here’s a word of caution for any of those looking to pick up over 15m² of cement tiles.  They are heavy as hell; heavy enough to seriously damage your vehicles suspension or the axel if not balanced properly.  You’d be a proper bell-end not to hire a van.

Naturally, we headed on our way in our humble Laguna estate.

The seller of these tiles was asking a “fair offer” for his reclaimed tiles and he accepted ours after a little haggle.  Each deal made on Le Bon Coin is different, but so far we had nothing but great luck with the things we bought and the people we have dealt with.  I kid you not, we found our house on Le Bon Coin!  The guy who showed us the tiles on behalf of his wife was very professional and really helpful to the point of coming to meet us in a traffic stop after their address turned out not to be on the navigator.  He even helped us loading up the Laguna.  Without trying to be disrespectful, (our offer was pretty damn close to what they were thinking about anyway)  I have seen these types of tiles go for nearly ten times that on dedicated salvage websites.  Driving three hours to view something you saw online may seem excessive, but for a deal like this, we would have done twice miles.

And besides, Arles turned out to be beautiful!  We had the weather on our side, a high of 25 that day and not a single cloud on the sky.  Having packed up our new purchase we checked in to the Hôtel Le Rodin, a tidy little place that was more than happy to accept dogs as big as our Rusty.  The service was wonderful and the hotel was situated within walking distance of the city centre – our next stop as by the time we had fed our pupper it was pretty much beer a clock.  So we had a pit stop of dark craft beer and local cheese + a small plate of charcuterie, seated at the terrace of Picador, a bar with their own deli, near the old amphitheatre.

After checking out few of the main attractions, being hurried along by Rusty who was frantically looking for a grassy spot to do his business, we found a little restaurant called l’Autruche – the ostrich, which had just re-opened.  They, like most businesses in France to be honest, were happy to have a dog lounging in our feet as we tucked into their daily-changing set menu of locally sourced produce.  James and I both chose fresh asparagus, served with a soft boiled egg, a small salad and pureed greens.  A superb starter to go with our chosen bottle of organic wine, which James followed up with a combo of a lamb chop & tatties, and I with flaky white fish, steamed and seasoned, on a bed of green lentils.  Not normally a huge fan of the bio wines, I enjoyed this red – it was a lot lighter than expected, almost like the new season’s stuff, apparently due to the lack of sulphites that help to preserve the flavour in wine produced using the traditional methods.  The tipple came warmly recommended by the owner, who was really damn nice.  For a Friday night, it was pretty quiet everywhere.  We felt a bit like crashing a private party – everyone here was clearly pretty well acquainted…

But hey-ho.  We did stay for a second plate of cheese that day to end the evening.

In the morning we were faced with a task of redistributing yesterday's loot in a manner that our Laguna wouldn’t brake in half during the hard drive home.  That meant fitting as many tiles as it was safely possible into the front passenger seat, thus seating myself in the back with Rusty.  DO NOT TRY THIS AT HOME, folks.  Just because we and our vehicle survived, it doesn’t mean it was a good idea.  As the bottom of our estate was nearly scraping ground all the way to Mazamet, we chose to favour the motorway.  Pity, as otherwise we would have taken a detour to see where the couple that built our house came from.

Based on the details they left behind, we have a reason to believe the original owners had a connection to a village called Blauvac an hour and half away from Arles.  Down to the design and colour, the tiles of our kitchen and the ones we just purchased are identical indicating they came from the same factory.  These types of encaustic cement tiles are still being manufactured by hand, using the traditional colours and patterns, most prominently in Marocco.  Our motif is pretty rare and typical to these parts of the South of France, so it is reasonable to assume there might have been a factory manufacturing them in the region. 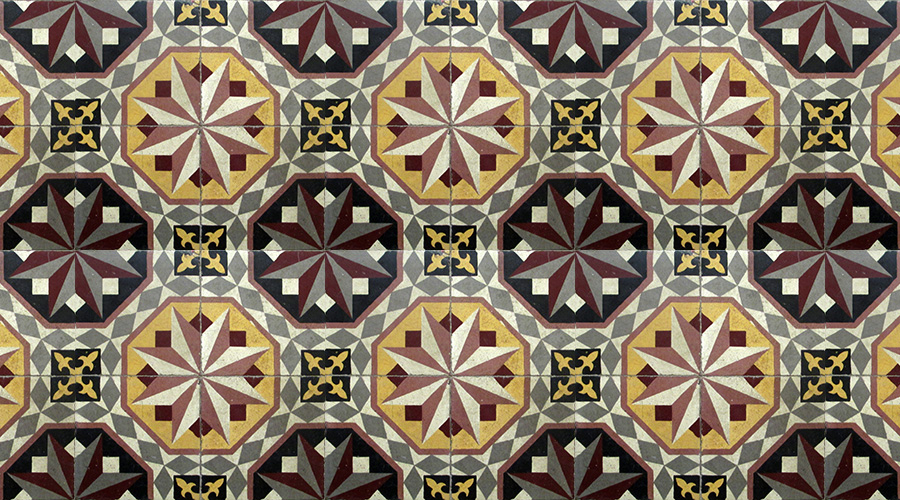 I couldn’t resist digging around online and it seems, indeed, that the biggest cement works producing encaustic cement tiles, Cimenterie Lafarge, was based in the village of Viviers in the department of Ardèche since 1850.  Their tiles were initially reserved for the bourgeoisie but soon became popular everywhere.  Sadly the production was ceased in France by the 1970’s; colourful cement tiles featuring intricate geometric- or stylised floral motifs, had fallen out of vogue in favour of ceramic tiles which were a lot cheaper to manufacture.  In 1910, however, when our house was built, encaustic designs were still all the rage.  It may be relevant to mention that Viviers, the centre of cement works in the South of France, is situated an hour and a bit from Blauvac as well as hour and a half away from Arles.

I present my case: our tiles are made in France, not so far from where the builders of my house might have come from.

They rest safely in out cellar now, waiting to be cleaned and re-sealed before being installed into the room downstairs that is to be our new kitchen.  It will not be any time soon – perhaps the summer next year, but I am glad we did not let this opportunity to slip through our fingers.

Random stranger from the Apartment Therapy forum – thank you a million times for finding out about this seller and his wonderful tiles!  We couldn’t have done it without you.  And an honourable mention for our Renault Laguna, you are the best.
Posted by Unknown at March 13, 2017