It’s been a while huh?

As the temperature climbs from the high twenties to the mid-thirties here by the Montagne Noire, my motivation to function plummets exponentially.  And what would be a better project to tackle when the sun is hot than overhauling a garden full of concrete and dog poo?  It has been months in the making, but it seems that our outdoor space is finally taking shape despite of this heatwave holding Europe in its deadly grip.

To say we had to start from scratch with this one would be an understatement; to even get to the concrete base covering the whole surface of our little gardenette, we had to clear away a decade’s worth of ivy and moss, dead leaves as well as heaps of general garden waste – all in varying stages of decomposition.  To utilise this half-putrefied mess, our first priority was to buy a composter unit.  As it stands, food waste is not currently collected in Mazamet, so having our own composter in the garden would help us recycle our scraps and provide compost for all our future needs.

We also needed to get rid of a few pesky trees, including a London Plane that was mere inches away from the garden wall and destined to grow huge.  Another had already damaged the surface of the old concrete patio with its roots and thus it was getting on my tits.  In fact, I hated it so much that I took a dull saw to the bastard and spent almost an hour cussing and sawing through blood, sweat and tears until the tree was no more.  A bush, a shrub and odd patch of completely tasteless wild strawberries soon met the same faith.
Having gotten rid of it all, seemed that we had managed to eradicate every single piece of greenery from our garden either by chopping, scraping or pressure washing it…

…until the roses appeared from under the rubble.  Two old but beautiful varieties in fact, planted by our current neighbour who used to reside in our house in the 60’s with her family.  These were the only original elements from the old garden that we saw worth keeping – and to what results!  With a little pruning here and there, are these not two of the most beautiful roses you have ever seen?

Other new plants include stunning bush of lavender, rhubarb, thyme and rosemary.  I also planted a selection of bulbs, none of which have shown any interest in blooming so far, but such is gardening: constant investment for the next season.  We chose purple slate as the filler for these beds, hoping it would slow down the snails and keep the area as weed-free as possible.

The old patio, completely broken up by a web of roots, was dug up and replaced with the help of Rusty the dog who loves digging.  We levelled the base with a few bags of sand, laid down the law some factory off-cuts of engineered slate in light beige and filled the gaps with specs of subtly rose-tinted marble that works well with the purple slate.  In time, this is where we’ll set up a table and chairs once the right set comes along, but for now, it’s a steady base for Rustys paddling pool when he gets too hot in his furs, a bbq or a set of planters.

Parts of the shallow wall separating the gravel from concrete was too damaged so it had to be replaced.  I made my builder-dad proud by fixing up my own from mortar and broken up specs of colourful cement tiles.  Small boulders of natural stone we had previously found were used to line the flowerbeds around the ring of the patio and as a dinky rockery.  Small details, but they add a little bit of cosiness to the otherwise plain concrete base.

With all this talk about stone, you might wonder why we did not go for grass in the end.  I would have really wanted to, not least for the dog to use as his latrine, but in this climate it needs constant maintenance to look good in the summer.  Even with the diligence of the local gardeners tending the public spaces in Mazamet, the grass is yielding under the sun and there’s only so much watering I want to do on day to day basis.

So if the experts can’t keep it alive…  I’ll just stick to pot-plants myself, thanks.

Here you have it: even with most of the base work now completed, there is plenty to be done – we have a few more flowerbeds to construct and an old antique trough to be repurposed as a vegetable batch, but more about that later.  It’s simply too hot to even write about hard work! 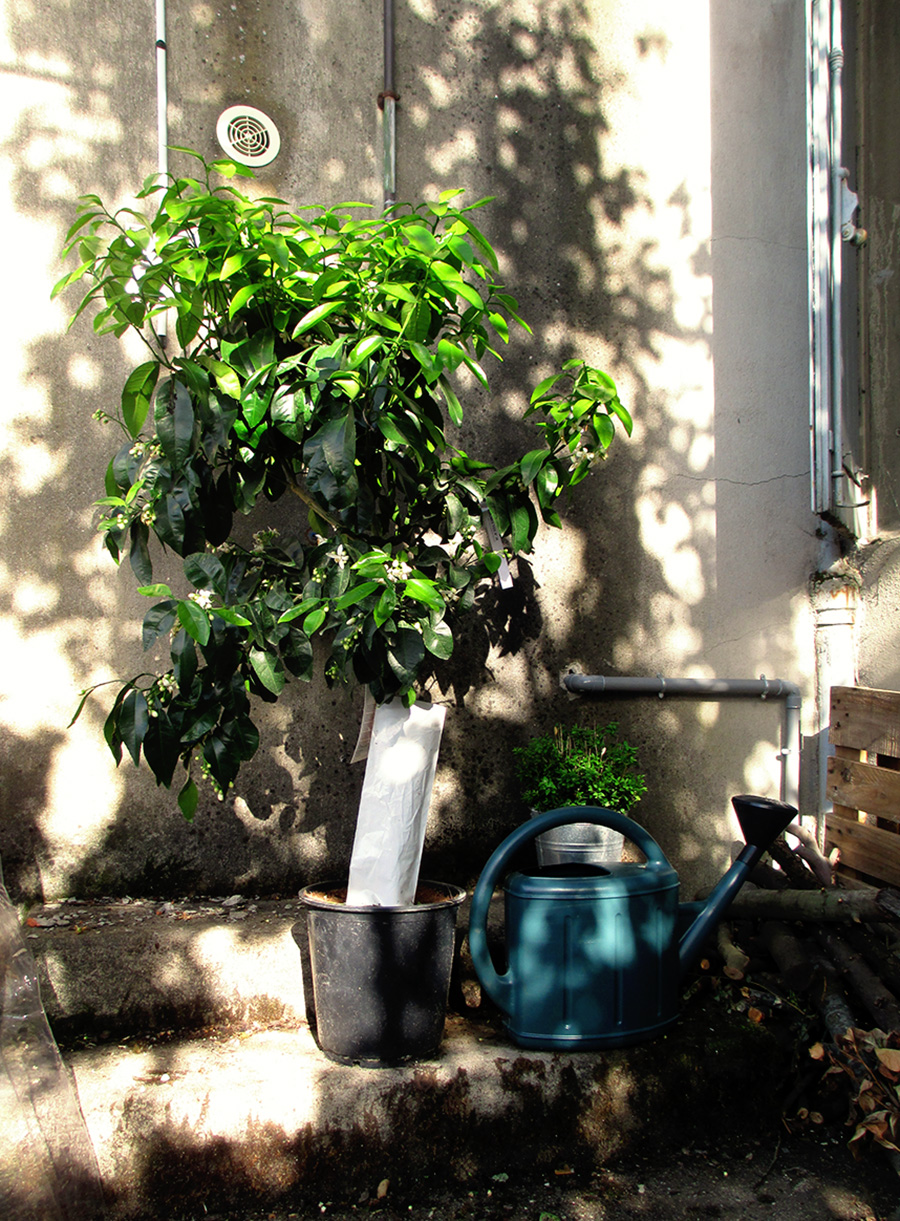 Hey– and if you have tips on how to kill slugs without heavy poisons, drop me a line – the cherry tomatoes and our dog will thank you.