Our house was built before the first World War, but so far the most fascinating insight to the early history of our dwelling came in the form of a few sheets of L'Express du Midi, found under the wallpaper on our built-in wardrobes.  These newspapers date between 1918 and 1924, thus giving us valuable information of when these cupboards were constructed, but beyond learning about our home, the brittle pages open a window to a world long gone: the everyday life after World War I in regional France.

People talk about the roaring twenties, but the idea of a golden, carefree era between the end of the 1914-1918 war and the stock market crash of 1929 did not really exist.  In reality, most people took their time to recover after the war, emotionally, as well as economically:  The war machine that ate away the sons, occasionally spitting away nothing but bones; worse yet, broken men had grown quiet, but the lives lost left behind a sizable hole in the young male population, shaking small rural communities to the core.  People displaced by the fighting and the Spanish flu pandemic of 1918 were struggling to return to a normal rhythm of life - and what was normal anyway?  It could have been said the Great War marked the beginning of modern times - in both good and in bad.  Things that contributed to the myth of the 1920's: the café culture of Paris, the bohemians and the flappers, the Great Gatsby, Josephine Baker and all that jazz... that was not most peoples reality living through the decade. 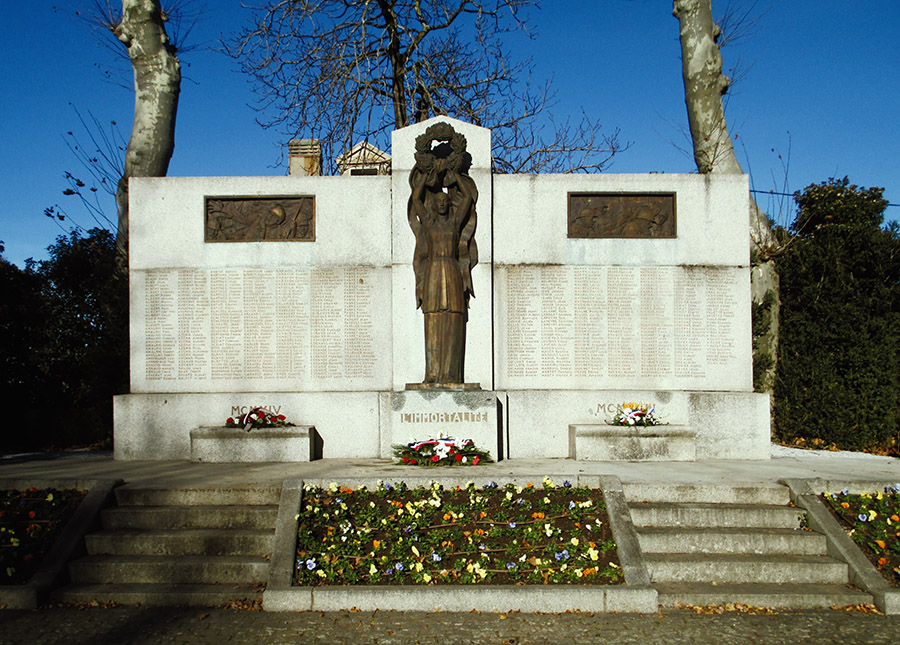 Mazamet, my hometown, was a thriving industrial hub built on the textile and leather trade. A quick look at the development of population in Mazamet reveals that it had dropped during the war, but grew steadily throughout the twenties: an indication of an abundance of jobs available and economic stability.  The Montagne Noire with its mountain streams provided a steady supply of clean water for the industry and there was plenty of unskilled labour available to take on the jobs the factories provided.

Our house was originally built as a crèmerie and this must have been a prosperous time for them, as we know they embarked on a hefty renovation program remodeling two of the grandest rooms of this house in a trendy Art Deco-style.  The rest of the town was booming too: great big townhouses and villas were being erected to house the families of the wealthy factory owners, some of them being the oldest steel framed houses in the South of France. These grandiose homes were decorated with marble and hardwood, whereas my cheesemongers settled for the next best thing: wallpaper.  And this is where the L'Express du Midi comes in: the makers of the new built-in units used sheets of newspaper to line the exteriors of their new wardrobe doors.

I found these pages hiding under what felt like a million layers of wallpaper and they are pressed as full of text as it is possible to read, broken up only by regular and beautifully illustrated adverts for products such as fortified apéritif wines, ladies garments and pseudo-medicines, basically all the goods that were again openly available after the war.

L'Express du Midi, (1891-1938) produced by Le Nouvelliste de Lyon-group was a catholic newspaper based in Toulouse.  One of the leading voices of the conservative opposition in the region and the main competitor for the left leaning La Dépêche du Midi, it defined itself as "the publication of the social and religious defense".  Mazamet, at the time, was a town divided by religion and class: the vast, catholic working classes led very separate lives from the predominantly protestant upper class.  I had been trying to guess the beliefs of the family that built my house and by finding out about the politics of their chosen newspaper, I can be certain they would have been devout Catholics.  As merchants, though, they must have worked with all walks of life, serving cheese right beside a grand protestant church.


But what created headlines in the early 1920's?  Aftermath of the war and signing the treaty of Versailles, sure.  Everyday political upheaval between the left and right, strikes, general elections... and refugees flooding Europe.  After the end of the war - surely that can't be right?

Once the guns had been lowered between the Allies and the Central Powers, the killing had only started in the newly formed Soviet Union and the supporters of the old régime were fleeing the bloody civil war that was raging between the Bolsheviks and anti-communist "Whites".  The ones that managed to escape were seeking a passage to mainland Europe via Odessa, desperate for a ship to carry them and their families to safety.  An estimation of 400 thousand of the refugees chose France.  The influx of these strangers would have been strongly felt and the L'Express du Midi paints a powerful portrait of people, displaced and waiting for rescue - or certain destruction.  Sounds familiar, doesn't it? It is harrowing to think how little the world has changed in nearly a century.

Another little article talks about "the wives of (coal) miners opposing the imminent strike action" in the United Kingdom, referring to activity that would ultimately culminate in the 1926 general strike that lasted for nine days.  The low consumption of coal, decreasing export market and the artificially strong position of the pound had driven the price of coal to a record low, nearly halving the miners wages.  To stir up the mess that was forming, Germany, whose industry had been heavily sanctioned following the defeat to the allied forces, was allowed to re-join the coal market in 1924 and provided coal for Italy and France practically free as a part of their post defeat reparations.  In the end the miners were to achieve nothing.  They held their ground at first, but had to return to the pits to work even longer hours with less pay - those who still had their jobs anyway.

In addition, both my native country of Finland and my current hometown of Mazamet get a mention in 1920:  The delegates of the newly independent Finland and the Soviet Union were involved in negotiating what would be know as the "Treaty of Tartu" in Estonia.  This peace treaty was to draw a new border between the two countries and cause bitterness and friction on both sides, notably affecting the decision in Finland to try and reclaim the lost areas during the Continuation War (25/06/1941-19/09/1944).  This decision was to turn sour for the Finns: They avoided being occupied by the Soviet forces but ultimately lost further areas, including massive chunks of the Finnish heartland, Karelia.

Mazamet achieved prominence this week thanks to the visit of M. Claverie, an esteemed authority on the treatment of hernias and other displacements of internal organs, offering immediate and long-lasting relief.

Reading through these pages of yesterday's news has been an eye opening experience.  As a keen student of history, war history in particular, I always found the Great War distant and hard to feel largely due to the focus on numbers and statistics over the real human experience in mainstream history telling.  It is also a conflict largely overshadowed by the Second World War.  It's easy to forget the Average Jacques when reading about the undying personalities such as the Red Baron, Manfred von Richthofen, but these articles dating from the last days of the war made it all feel eerily real for me.  The memorial with rows upon rows of names carved in cold, hard stone, could not evoke as deep of a sense of sorrow as the last advert I'll post here for you to see: a notification of a free service for locating lost soldiers, two years into peace, for families that were still looking for their loved ones.

The estimated casualties of the First World War were more than 38 million, including a total of 17 million military and civilian deaths, 20 million wounded and numerous who simply vanished.  For the many thousands of families that had to bury a loved one, thousands more never got to know what happened to their nearest and dearest.


I am lucky enough never to have known war.  Let us not forget the horrors these people lived through and those who lost their lives for others to exist in a world without war, after all, this was supposed to be the war to end all wars.