I talked previously about the history of our walls and thought it is time to kick off the grand saga that is the ongoing restoration and cleaning of our floor tiles.  After all, it was those gorgeous antique tiles that sold us this house last autumn.  And boy there's a bit to talk about: some of the floors were already beautiful beyond belief and only needed a deep clean - but some... well, had been considered to be beyond repair.  SPOILER ALERT - THEY WERE NOT.*

*So suck a fat one, the previous owners of my house from the 1960's who thought so!

Starting from the most labour intensive job, this is a story of me and my hubby discovering, cleaning and sealing a bunch of terracotta tiles that were hidden under ghastly sheets of linoleum.

Over all, the tile work in our little old house is in pretty good nick:  The trend of erasing history of old dwellings swooped by our place, not once or twice, but every generation or so and where the walls with their decorative strips of crown molding took a bit of a hit each time, the floors were left pretty much as they were - with the exception of these 20x20cm terracotta tiles.  We discovered them on our first visit to the property, hiding under some pretty fragile linoleum and in a desperate need of tender love and care.

In fact, only one of the rooms of this house has had a complete floor change since the house was built in 1910, not counting in the bathrooms that would have been retrofitted by the 1940's-1950's.  Tile-wise, on that ground floor salon that was refurbished as a bedsit, perhaps to accommodate an aging proprietor in the early 80's, they did a pretty good job, ignoring the complete lack of taste exhibited by their choice of a patterned porcelain tile.  I am normally against replacing something that is perfectly good and functional, but these tiles are just so god-awful that I am willing to make an expensive exception.

Having needed some space to live, our first task upon moving in was to clean enough floors to fix ourselves a temporary living room, a bedroom and a kitchen.  The house had been derelict for just over ten years and everything was, understandably, dirtier than a blind mans toilet.  Cleaning the kitchen floor, rocking the beautifully moody encaustic tiles shown above, was a piece of cake:  It turned out, most of the tiles cleaned up well with just a drop of PH neutral dish soap and were, rather surprisingly, not in a desperate need of resealing.

The case of terracotta tiles found hiding in our bedroom and the lounge, however, was a different matter entirely.  Having been in a need of a sealant and re-grouting, somebody in the 60's (curse these people to hell) thought, either, that repairs were too much work or just preferred more of a contemporary no-maintenance material.  Luckily, instead of lifting the tiles and the sand-cement they were laid on, the homeowners leveled the floor by covering it entirely in lime and installed a carpet of linoleum straight on top of the compacted lime dust. 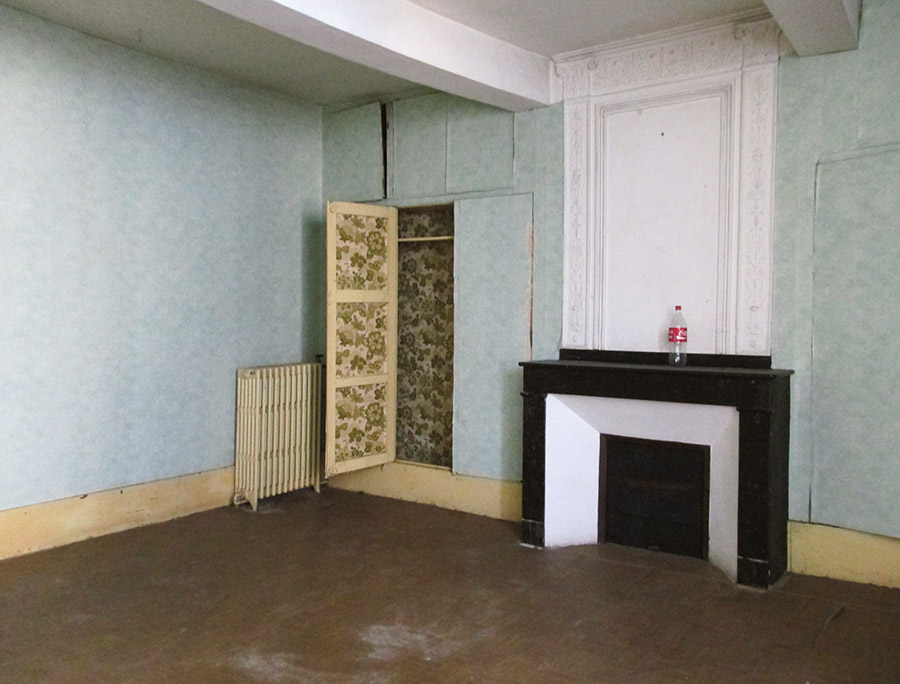 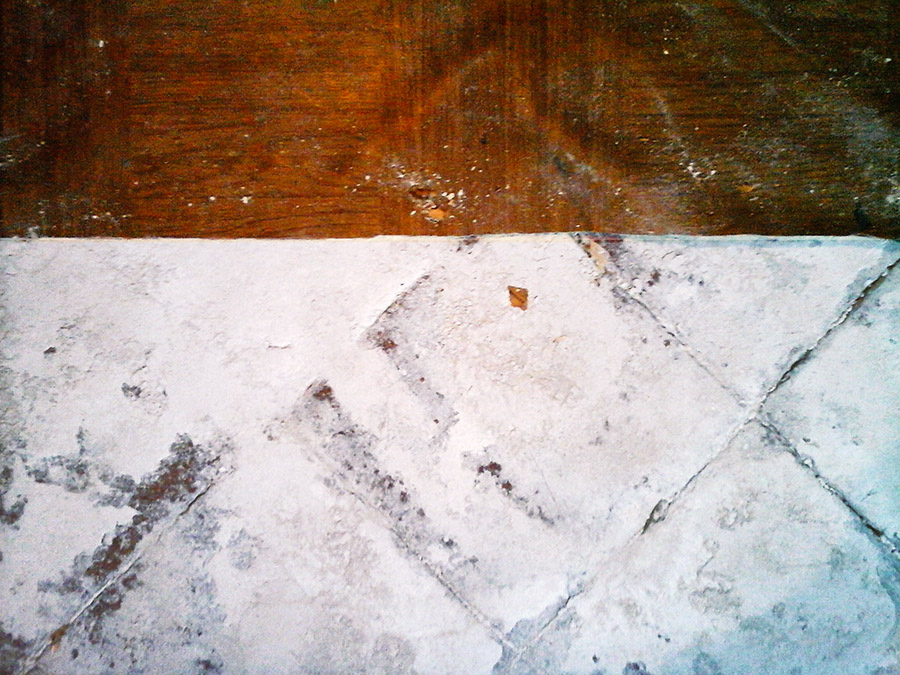 Of course, a no-maintenance material does not exist - except in the dreams of salesmen and lazy homeowners.  Easy to install, easy to care materials such as linoleum, vinyl or laminate do not need maintenance at first and clean with ease, but after a decade or two, depending variables such as the quality of the product, general wear and exposure to the sun and moisture, even the toughest of these materials will age ungracefully and will need to be replaced.  The wood imitation-linoleum, laid on top of our century old terracotta tiles, had faded, bubbled and cracked so badly under the blazing sun of Mazamet that it was taken straight to the tip.  It did not adhere to the floor at all, implying that it was never properly fastened to it's base or the glue holding it had dissolved a long time ago.

Turned out, taking off the lino was the easy part...

It took the both of us, me and my husband that is, two days to scrape off the packed lime dust on each floor.  Sometimes the stuff came off in big sheets, but more often than not, it needed to be chiseled off one tiny chip at a time.  To save our little Henry the Hoover from clogging up, we swept the dust by hand before revving up the vacuum - in hind sight, I firmly recommend wearing a mask for these types of jobs... safety first boys and girls!  You don't want to be digging out dust from your nose like I had to.

We followed up by a couple turns of serious moppin' before getting down and dirty armed with a sponge and a bucket.  Where the scrubbing was not quite as back-braking as the chiseling of the lime, it took it's time; a full working day in each case.  I finished the job with two coats of sealant that was specifically designed for porous terracotta tiles.  This stuff was pretty easy to use and dried up in about half an hour per coat.  If only the tiles had never been covered in the first place!  Where we spent four days on each room restoring the look and function of our antique tiling, cleaning and sealing them in the 60's, instead of paying for linoleum, would have taken less than 4 hours per floor.  Cheesus Christ! 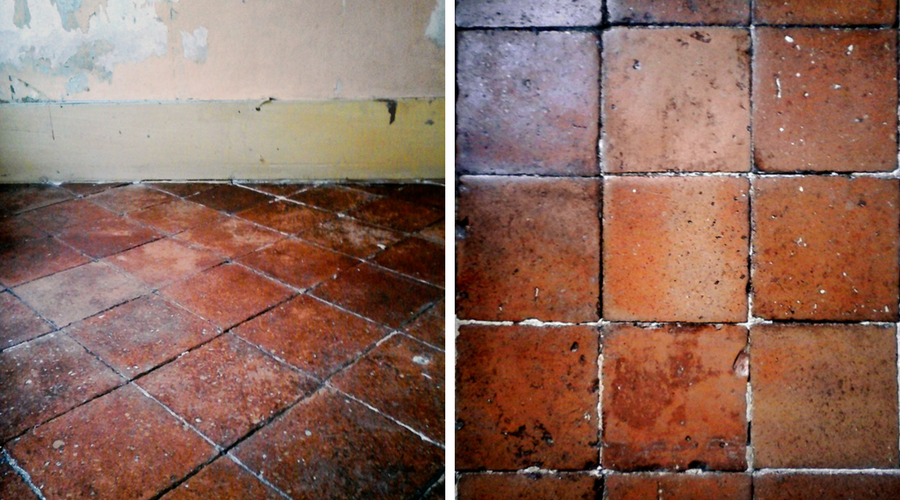 But all said and done - I'd say the results were well worth it!  These tiles don't look new, but why should they?  They got holes, residual lime stuck between the grout lines as well as wear and tear worth a century, but that's what we like about them.  Replacing these tiles with new ones would have cost us a big penny - even if I would have chosen to go with new linoleum.  And that would have, in turn, needed to be replaced after a few decades under our burning sun.  Terracotta is hard wearing, extremely easy to clean and maintain, as well as pretty trendy for the time being, just in case you need a reason or two to start giving your elderly tiles some love.

I hope ours will be good for another 100+ years. 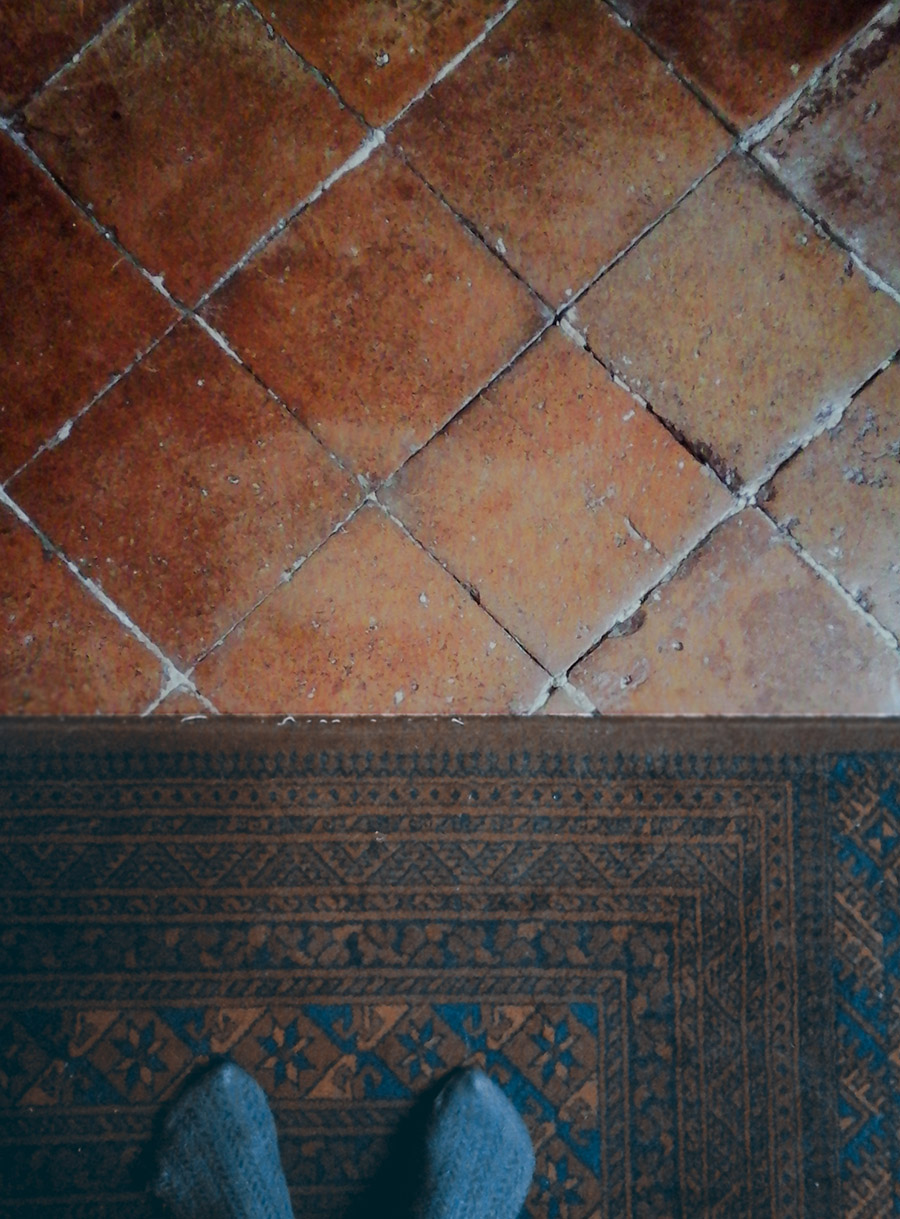